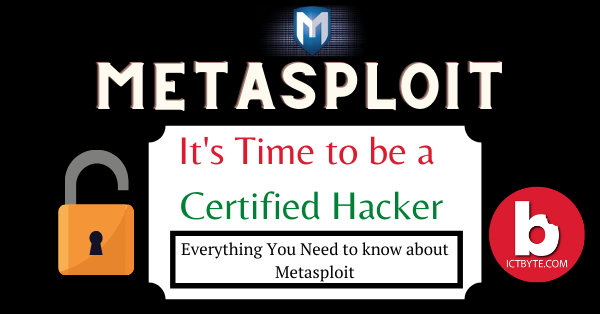 Metasploit is one of the popular and well known penetrating tools.It makes hacking more easier. Metasploit has a wide range of suit Framework which have the extensive uses tools offering the forum for the exploit development and pen-testing.

With the use of Perl programming language H. D. Moore created Metasploit as a portable network framework on 2003 AD after four years later Metasploit Framework was later rewritten in Ruby by 2007. After two years of the rewritten of the project, Rapid7 purchased the Metasploit. After that, The project has been intensely grown up from it’s initial 11 exploits to include over 1,500 exploits and with more payload options.

Before Metasploit was created penetration tester executes probes manually via physical testing. The testers employed a range of tools which couldn’t bear any kind of guarantee and also unknown about the supports of the platform which testers are accessing. The network should need a codes in written format by the pen-tester. In such situation Metasploit has become the potential remote tester tools. Before the introduction of Metasploit the organization has to believe in their own security professional with the low fortune of strong security protocols. where the introduction of Metasploit has become one of the most strongest norms for a zero-day reports.

What is Metasploit written in?

The open-source modular penetration testing program Metasploit is based on Ruby which consist a suite of tools.

As a default, Port 3790 is supportive feature to run Metasploit. If you installed a Metasploit then you are featured and granted of the use of accessing the information via different methods i.e target your either by using OS fingerprinting, port scanning, and applying a vulnerability scanner to look for loopholes into the network and many more.

The computer security tool which provides the authentic information of the software IDS signature development, vulnerabilities, and improves penetration testing system is known as Metasploit. Metasploit is an open-source platform which allows the every hacker to customize it according to their Operating System (OS). Metasploit tools is used to execute and develop exploit code against a remote targeted device. you can made a Licensed Penetration Testers of where you can use a Metasploit framework ready-made or custom. then you/your team can presents it into the enterprise network to explore the spots of vulnerability.

The plus benefit of Metasploit in the time of threat hunt is that if you can recognize all vulnerabilities and documents it then the obtained information can be applied to resolve the systematic flaws.

Do hackers use Metasploit?

The Legal term following hacker conduct their penetration testing which can be called as Metasploit. Fundamentally, Metasploit is the white-hat hacking tool which have the responsibility of vulnerability assessment and for defending an organization’s network.This is not surprising because Metasploit is a powerful technology which can exploit the Ports and IP Addressing.

As we go through the inner part then we need to know the modules of Metasploit. It is capable of of executing a precise action, like exploiting or scanning the tasks and those task which you’ve been executed with a Metasploit is covered with the Framework of it’s module. There are various type of modules on a Metasploit which depends upon the purpose of module and it’s action. After the initiation of msfconsole you can load modules and even you can load it at the runtime.

The Modules of the Metasploit are briefly explained below:

The tech term exploit is defined as to find out the weakness on the program and then hitting on the weakness of that program or application. The system vulnerability create access to the target system as the advantage of Metasploit modules.Some of the examples of this modules are WordPress exploit, code injection, etc.

This Modules can runs after the infiltration of the the modules i.e exploit. It is based upon the filtration status of Exploit. After the compromise this modules can be performed. It includes the set of instructions which can be performed for the target system. For the use of this modules you might need to obtain the controls of the system sometimes but normally it can allows you to control the system to connect the shell and craft for motive your own system. The payload comes as a diversion of the feature as ranging from a few lines of code to small applications. It has the main responsibility to open the command of Meterpreter. Here, Meterpreter means an innovative payloads which grants you a permission to contribute on DDL files strategically for the generation of new structure based on your need.

This is the important modules of the deeper penetration. It can extremely helps you to collect or obtain more deeper information of an exploited target system/victim. The Application and Service Enumerators, and Hash Dumps are the examples of this modules.

The functions which don’t need a payload to run is an auxiliary functions. It can be used to execute random function rather than linking with the exploitation. some of the examples of the auxiliary modules are DoS (denial of service attacks), SQL injection tools, sniffers, fuzzers, and scanners.

This is the most sensitive and the most important modules aka tools which can be used in the purpose of converting the codes and information. The most crucial things for exploitation is the encoding of Shell code. The encoders are the sensing device which is responsible to give feedback for the determination of the digital signals.

Listeners can be defined as the malicious software which help the hacker to gain access to a system. Listeners are well-known as particular handlers in the Metasploit Framework that can relate to the sessions produced by payloads.

NOP is defined as the short for No Operation. NOPs is the instruction that keeps the payload from crashing. A NOP i responsible to generate a series of arbitrary bytes which can be applied to bypass standard IDS/IPS NOP sled signatures.

Tech Byte hope these guidelines help you to know everything about Metasploit. If any queries arise regarding this topic then ICT BYTE recommend you to comment below. Here, we are always active to help you so don’t hesitate to share your doubt.

8 signs that your android phone is hacked

Everything You Need to Know About the Dark Web

What is phishing? Everything you need to know about phishing