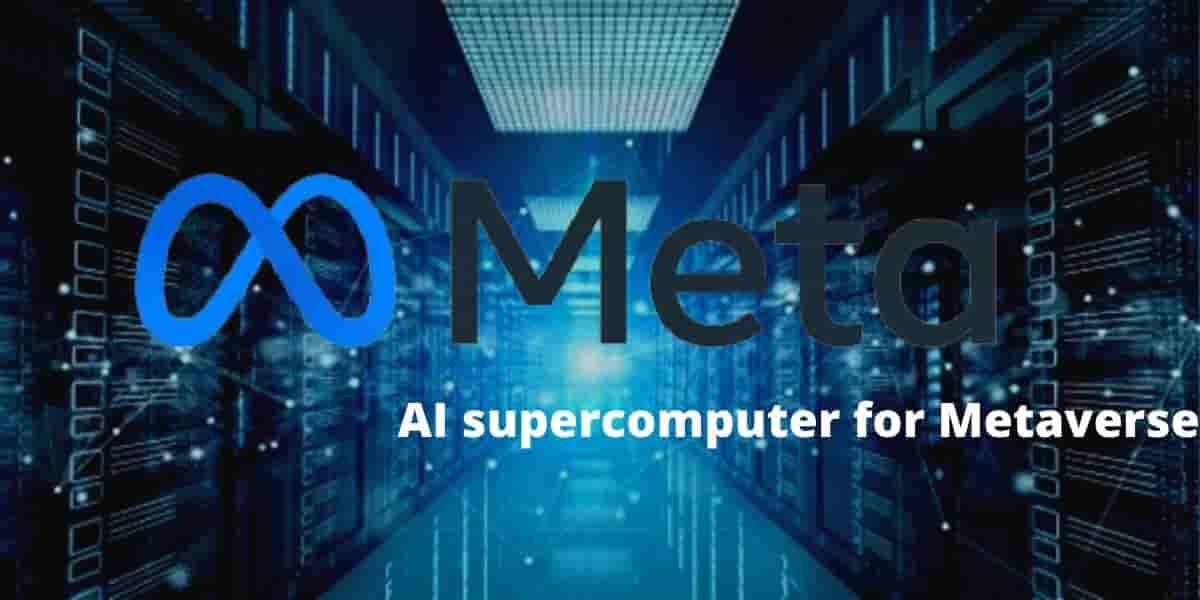 AI supercomputer to be developed by Meta , parent company of Facebook . The announcement of Facebook going for metaverse was one of the biggest news in 2021. This news created buzz among people all over world for time being. Once again Meta, home of Facebook is becoming talk of the town with sudden news of developing AI supercomputer for Metaverse. On Jan 24, meta announced that it has developed one of the world’s fastest artificial intelligence supercomputers.

Supercomputers are highly fast and powerful devices designed to do complicated computations. The location of computer and its construction cost has not been revealed by Meta yet.  The computer that is running and being built by meta is called AI Research SuperCluster.

The social media powerhouse believes that the machine will contribute in the development of the metaverse, a virtual reality construct that will eventually replace the internet as we know it. Facebook claims that when the computer is finished in the middle of 2022, it will be the fastest in the world.

CEO Mark Zuckerberg pointed out that The experiences that Facebook is designing for the metaverse, need tremendous computing power – quintillions of operations per second. This new AI models will be able to learn from billions of instances, understand hundreds of languages, and more thanks to the RSC.

RSC is similar to the Perlmutter supercomputer, which has 6,080 graphics processing units in 760 Nvidia DGX A100 modules. Pure Storage, a data storage provider, and Nvidia, a chipmaker, are both part of Facebook’s supercluster. Nvidia, in particular, has been a , has been a firm supporter of the metaverse, promoting their omniverse product as a “metaverse for engineers.”

RSC serves as a boost for Meta’s “next generation” artificial intelligence, which will learn from trillions of examples, work across hundreds of languages, combine text, image, and video analysis, develop new augmented reality tools, and perform a variety of other advanced tasks requiring supercomputer-level performance. According to Meta, reaping the benefits of self-supervised learning and transformer-based models require a wide range of domains, including vision, voice, language, and essential applications such as recognizing hazardous content.

RSC is believed to assist  in developing totally new AI systems, such as real-time speech translations for big groups of individuals speaking multiple languages so that they may collaborate on a research project or play an AR game together. Finally, the collaboration with RSC will pave the path for the development of technologies for the next major computing platform, the metaverse, in which AI-driven apps and products will play a key role.

Meta has been criticized for its privacy and data protocols in recent years, with the Federal Trade Commission (FTC) saying in 2018 that it was examining serious concerns about Facebook’s privacy practices. Meta has aimed to address security and privacy concerns right away, claiming that the firm protects data in RSC by building it from the bottom up with privacy and security in mind. According to Meta, they are enabling the researchers to train models safely utilizing encrypted user-generated data that isn’t decrypted until just before training.

The blog released by company stated “For example, RSC is isolated from the larger internet, with no direct inbound or outbound connections, and traffic can flow only from Meta’s production data centers. To meet our privacy and security requirements, the entire data path from our storage systems to the GPUs is end-to-end encrypted and has the necessary tools and processes to verify that these requirements are met at all times.”

Before being imported into the RSC, data must go through a privacy review process to ensure it has been properly collected and stored, as per Meta. The data is also encrypted before it can be used to train AI models, according to the business, and decryption keys are constantly removed to ensure that outdated data is no longer available.

The creation of RSC for metaverse to enhance virtual reality to next level will be evolution in technology and AI. But it will worth to watch how successfully meta will balance privacy issue in this new innovation of virtual reality.