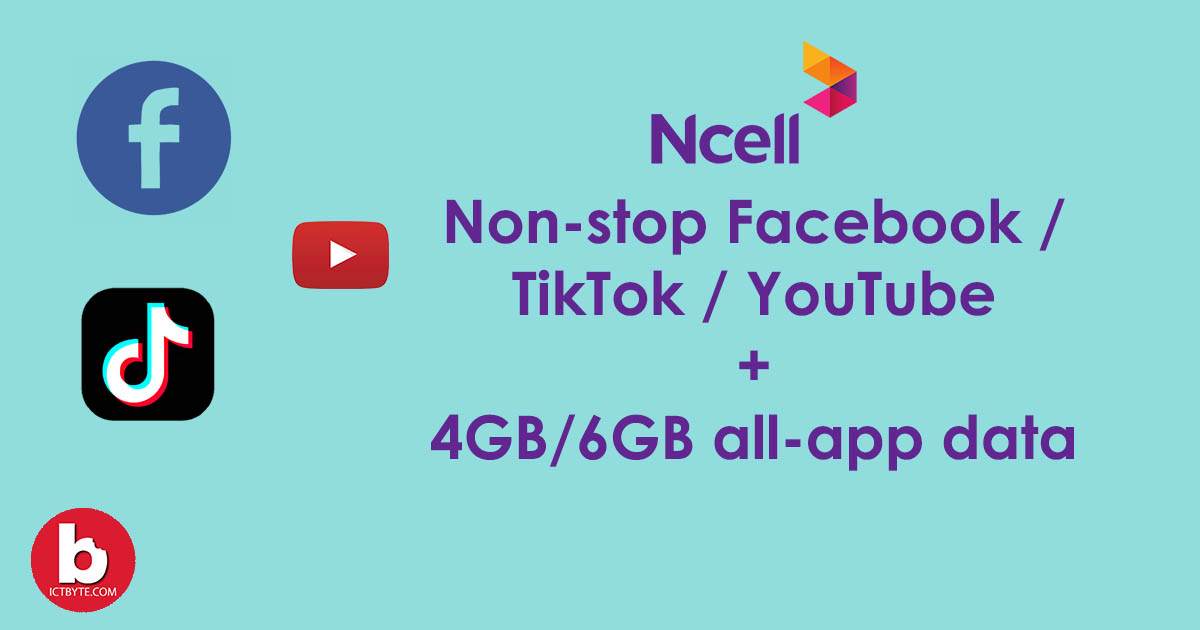 Most of us spend the majority of our time using either Facebook or YouTube or TikTok or all of them. However, they also consume a lot of data as it has to stream videos mostly. Keeping this in mind, Ncell has introduced the Ncell Non-stop Packs at affordable prices so that now you do not have to worry about using up your data packs while using TikTok, Facebook, or YouTube.

Under the Ncell Non-stop Packs, you can use the above-mentioned applications unlimited without any data restrictions, and the validity remains either 1 day, 7 days, or 1 month depending on what Non-Stop pack you subscribe to. However, you can only use these packs in the 4G network.

You can get unlimited data packs for either TikTok, Facebook, or YouTube for a period of 1 day, 7 days, or 1 month. In addition, you also get additional all app all-time data of a certain volume with which you can use other apps as well. The additional all-app all-time data is not available on 1 day non-stop packs.

You also have the option to buy Addon Pack if they have subscribed to any of the 7-days or 30-days Non-stop packs. The Addon Pack will let you buy data packs of 3500 MB (500 MB per day) with a validity of 7 days for either Facebook, TikTok, or YouTube.

After the recent additions, the available packs on the Ncell Non-stop packs are:

Note: Only the customers who have purchased the Non-stop pack can buy the Addon Pack.

Also read: Ncell Pahilo SIM: New SIM For SEE Students At Re 1 Only

Can I use the Ncell Non-stop Packs in 2G and 3G networks?

Can I take the Addon pack without purchasing a Non-Stop pack?

No. You need to subscribe to any of the 7 day or 30 days Ncell Non-Stop packs to be able to buy the Addon pack.

Can I use other apps as well using the Non-Stop Pack besides Facebook/TikTok/YouTube?

Yes, if you have the additional all apps all time data available, then you can use other apps from the data. However, this is available only until the available data volume is not used up.

You can subscribe to Ncell non-stop packs by dialing *17123*1# and going to Nonstop offers. You can also subscribe to the package by using the Ncell App or digital wallets.