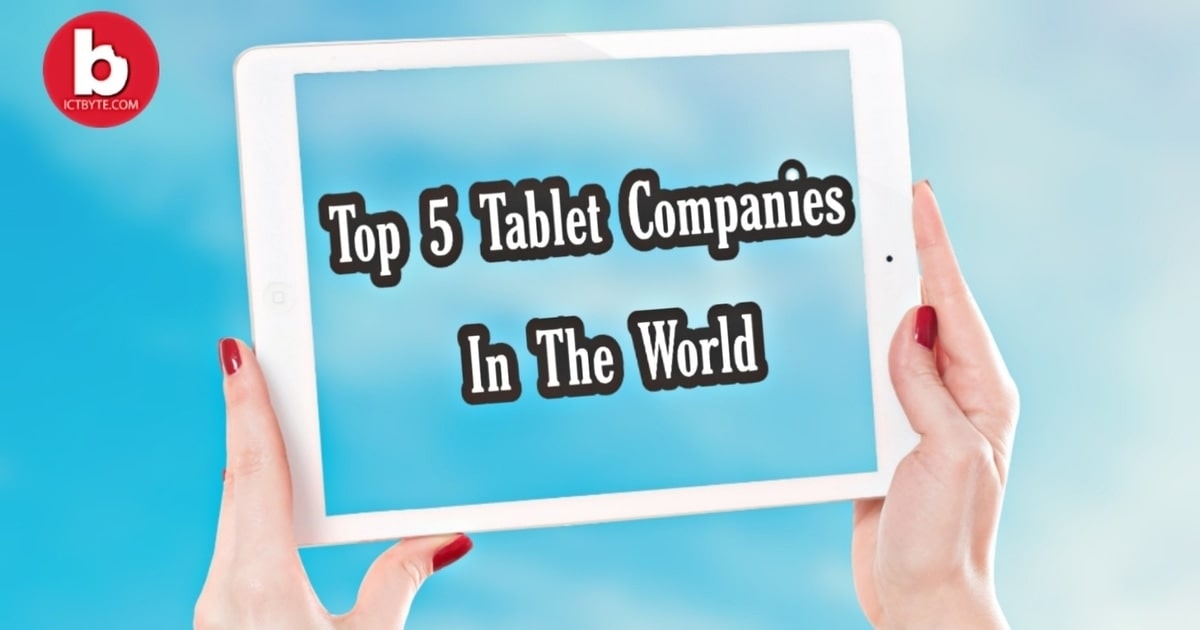 This is a digital era and everyone needs a digital device to perform daily tasks. Before people used phones or Pc but as Steve Jobs once said there is room for something between them. That something is a tablet. Tablet is basically a smartphone in a larger size but there’s a lot more you can do with a tablet than you’d imagine. Tablets are portable and have large displays. Also, it can also be a replacement of PC for certain tasks. As we can carry it and it has more features than smartphones many people prefer it more than smartphones and Pc for their tasks. There are many tablet companies that manufacture various tablets and they all have their own unique features. So in this blog, we have prepared the list of Top 5 Tablet Companies that produce the best tablets.

Top 5 Tablet Companies in the World

Good to know: 8 signs that your android phone is hacked

Top 5 Tablet Companies in the World

Founded in a garage in 1976 by Steve Jobs, Steve Wozniak, and Ronald Wayne, Apple began as a personal computer pioneer, the electronics giant entered the smartphone market with the iPhone in 2007 and launched its first tablet in 2010. Apple is the uncontested winner of tablets. Apple names its tablets as ‘iPad’. There is a high chance that if you own a tablet then it is an iPad. Apple’s iPad has features that are unmatched by any other platform or device maker. The tablets all consistently turn top performance and have high battery life, clear and crisp displays, and access to various apps in the App Store. And with Apple’s announcement of iPad OS last year, the company has slowly and methodically released updates along with features that differentiate it from the iPhone and make it closer to Mac.

Samsung is a leader in the smartphone industry. Samsung releases quite a few tablets a year with various features. Even back in 2010, at the CEATEC (Combined Exhibition of Advanced Technologies) held in Japan, the Samsung Galaxy Tab was declared the best. So, right from the beginning, Samsung has been making tremendous technological advancements to all its devices. But the best Samsung tablets may not dethrone the Apple iPad in the market but that doesn’t mean that Samsung tablets won’t offer spectacular features that will satisfy your tablet needs. Samsung has launched a series of tablets over the years, with several upgrades that fulfill various requirements.

When the original Kindle Fire was released way back in 2011, many users thought Amazon was onto something with a low-cost and simple tablet experience. Today there are no fewer than six Fire tablet devices on offer from Amazon if you also count the Kids Edition. Amazon’s Fire tablets are some of the only ultra-affordable tablets and high-profile present around. The Fire tablets all run Amazon’s Android-based operating system called Fire OS, so you won’t find any of Google services on the Fire tablets. Also, Amazon has its own Appstore.

The Chinese telecommunications company has been launching mobile phones since 1997. The company also makes Android smartphones and tablets. In line with the likes of Apple and Samsung, Huawei has a lineup of tablets in its pocket that are targeted at pretty much every price segment. With the trend of using this portable was gathering pace, the Chinese company came up with its own desktop mode that turns your tablet into a portable work machine. On the other hand, there are some Huawei tablets that you can watch movies all day long or play various high graphic games.

ASUS is a Taiwanese multinational computer electronics and hardware company that was founded in 1989. ASUS is one of the world’s largest and popular computer hardware companies. We all know ASUS for its efficient hardware and electronic devices on the market. Their ASUS Android tablet is best for many purposes, especially for games and entertainment. ASUS has partnered with Android, and surely you will find the top Android games and best apps for productivity with theses tablets.