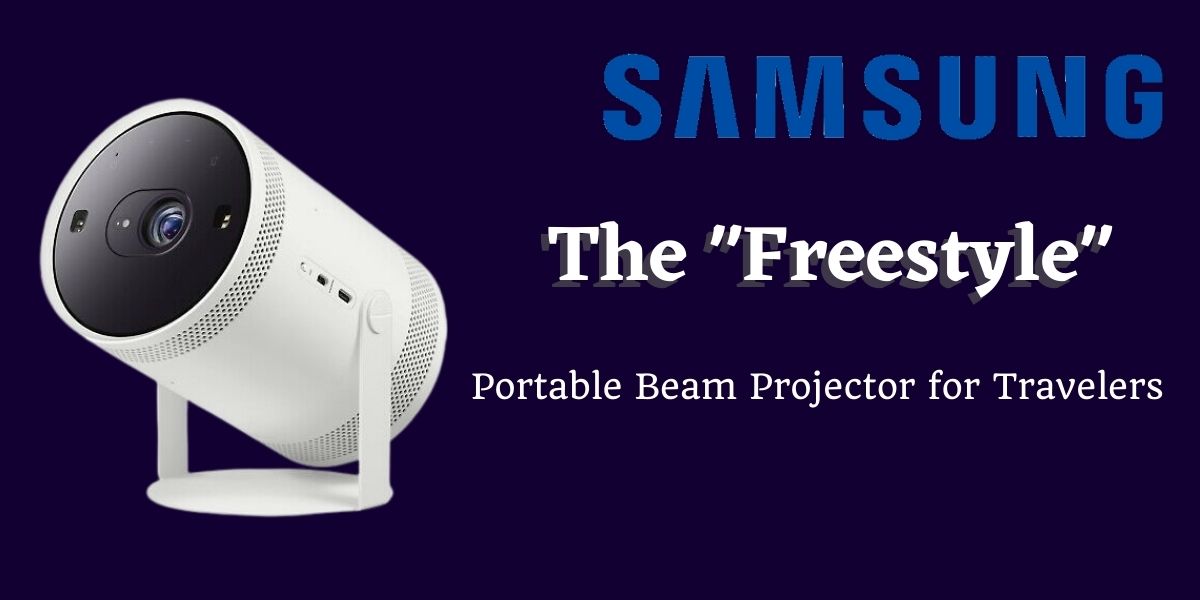 On January 4, South Korea’s tech giant Samsung announced the launch of portable beam projector named ‘Freestyle’. Since the new device is targeted for travelers and campers, it appears that Freestyle will allow people to enjoy entertainment when out and about. With the new projector, the business hopes to provide a better screen experience while overcoming the physical limits of TVs.

Samsung has marked itself as the biggest tech company around the world. Samsung is never behind in new innovation. The demand of the tech geeks around the world is always matched with the creative idea of Samsung. From foldable galaxy phone to portable projector innovation of Samsung has stamped its name in the history of technology.

People are used to being connected with technology and gadgets everywhere and anytime. From wireless headphones for audio to lots of other portable device, smaller gadgets are highly demanded by the users. In recent year portable projector have come in the limelight. Portable projector have been really helpful to view videos and animated graphics in a larger screen anywhere and at any time.  Highlighting these factors Samsung launched this portable beam projector targeting mostly to travelers and campers so that they can enjoy their videos while camping and travelling.

The beam projector named as Freestyle is a handy projector model that has weight of around 830gms with very minimalistic design suitable for campers and travelers.  The freestyle supports screen size up to 100inches and can revolve around whole 180 degrees. This projector has ability to deploy screen from wall ceiling to floor. Officials have discussed the beam projector’s use. “Plug it into a socket and use it as a mood light.” It may also be charged with a USB cable or a power bank.

The projector can also display 1080p pictures on screens ranging from 30-100 inches and can be connected to Galaxy smartphones via the SmartThings app. The Freestyle features a capability that can frequently play media without Wi-Fi, since it is designed for Samsung customers who prefer to obtain entertainment on the go. Furthermore, the projector works with USB-C PD battery packs.

The Freestyle has a built-in speaker that emits sound 360 degrees, so no need to carry an extra Bluetooth speaker. It also supports various streaming services like Netflix and Disney+. This beam projector can let user cast through Android and iOS devices.

The Freestyle is a projector, smart speaker, and ambient lighting gadget all bundled into one lightweight, portable device aimed towards Gen Z and millennial. The Freestyle includes auto keystone and auto leveling features which is enabled by industry-leading technology. Due to this feature the device is allowed to automatically adjust its screen to any surface at any angle, providing a perfectly proportional image every time. The ambient mode and translucent lens cap present in Freestyle also allows mood lighting when it is not used as projector to stream content.

It’s the only portable projector in the industry to be approved by key OTT partners across the world, ensuring users get the finest video watching experience possible. It’s also the first projector with far-field voice control, allowing users to use the gadget hands-free while utilizing their favorite voice assistants.

Simon Sung, Executive Vice President and Head of the Sales & Marketing Team of the Visual Display Business at Samsung Electronics stated “The Freestyle is a one-of-a-kind projector geared towards ultimate versatility and flexibility to meet the consumers’ changing lifestyles”.

The Freestyle will be on display from January 5 to 7 at CES 2022, and will be available for pre-order on January 4 in the United States, with availability increasing to other worldwide markets in the coming months.