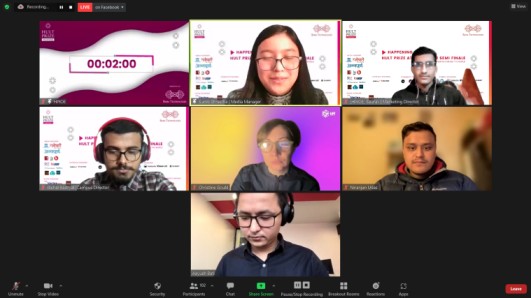 The semi-finals of the Hult Prize at IOE was successfully conducted amidst the chilly morning air of 5th February, Saturday with Bajra Technologies, Team Vertex Nepal, Impact Hub Kathmandu and Daraz. The media coverage manager Ms. Suniti Shrestha addressed the rigorous crowd of 47 teams who had reached the Semi-finals, the judge panel, guests and all those present on this exciting and long day long awaited. She congratulated the participants for endeavor to reach this far despite a fierce competition. She briefed the audience on the journey of the Hult Prize at IOE so far, including four entrepreneurship talk series and one mentorship session.

The Campus Director Mr. Bishal Bashyal gave a warm welcome speech addressing the audience, the judge panel, participants and the guests. He expressed his delight and having some of the most impactful entrepreneurs throughout all of the events so far who guided and mentored the participants and constantly inspired them to polish their rudimentary ideas.

Suniti introduced and expressed her deepest gratitude towards all of the sponsors and media partners without whose constant support and coverage Hult Prize at IOE couldn’t have dreamt of the level of success it has witnessed.

As the event progressed, the keynote speaker Mr. Nishesh Tiwari, a representative from Bajra Technologies, and Senior Director at Hardware Solutions, voiced the keynote for the Semi-finals “Dreaming Big”.

Suniti then introduced the panel of judges and heartily welcomed them after which she elaborated the rules to be followed by the participants through the various stages of the event while pitching their ideas. With the rigorous pitching done with each team geeting 3 minutes for the pitch ad2 minutes for the QnA round, the participants scored on categories of Problem and Customer Definition, Solution Viability, Impact, Team, and Overall the long day was nearing the end.  Amid the pitching slots a scintillating musical performance from our guest the Mr. Aabhiskar KC-the voice behind “Ma Timro” in songs, Naganya Maya, Mellow soothed the tired participants.

A Discourse with Mr. Saunak Bhatta and Angad Daryani

There was a motivational discourse with the first guest speaker for the day, Mr. Saunak Bhatta about action, impact, ethical framework. He also addressed questions from the audiences. Then, the project manager Ms. Aakriti Sharma, welcomed the guest speaker of the day Mr. Angad Daryani, the founder and CEO at Praan, an inventor and a social entrepreneur. She had an open conversation with Angad Sharma on his experience with inventing a 3-D printer at a young age of thirteen and how the project came to be. Reminiscing his adventure, he opened up about how he built a 3D printer out of the scratch as a result of the buying not being an affordable option at that time.  He inspired the participants to learn from the knowledge all over the world and scale it to the group of people you are catering to and emphasized on the need to build the best project that is sustainable and affordable and leaps and bounds better than the existing businesses. He also talked of the challenges it holds, after which he talked about his company Praan and his experience being the Founder of Praan as a second year college student and currently the CEO of Praan.

Then there was an equally awe-inspiring session with the former Miss Nepal and successful marketing entrepreneur, Ms. Evana Manandhar where she elaborately on the teams on marketing and branding. An entrepreneur must be willing to calculate and take the risk before creating opportunities. She pressed on the importance of planning, putting your idea in a paper, and the complete analysis before you even start and the essence of implementation of the idea with a team.  She wrapped up her session with the mention of stability, consistency and dedication along with the monitoring the market and growing with the market for an entrepreneur.

The next guest speaker of the day was none other than one of the most sensational media presence, an extremely loved Youtuber, who goes by the name of Random Nepali, Mr. Rastra Bimochan Timalsena who is also active in the field of law, crime and entrepreneurship. He talked about his journey as a Youtuber and mentally prepared the aspiring youtubers of present and suggested any aspiring content creators to build and image one wants to present to the world and addressed the risks of losing yourself in maintaining the public image, very similar to what he experienced. He urged the participants to make the content that you enjoy making and to focus on the quality of the content. On the topic of time management, he confessed to dedicating his day time for his professional practice, and his evenings for the pursuit of his hobbies. In between, he admitted to having time for self-care, and rest. Addressing the query from the audience, he expressed his opinion about the legality of crypto-currency in Nepal and openly criticized the inability of policy makers to adapt to the challenges to new horizons and technologies instead of completely banning it.

The most awaited moment of the day had arrived when the Director, HR and Operations of Bajra Technologies, Mr. Sandesh Karmacharya, announced the 18 finalists of the Hult Prize at IOE. With this, an event full of zeal, hopes, experimentation, surprises, entertainment, knowledge exchange and a tad bit of stress had finally come to an end.