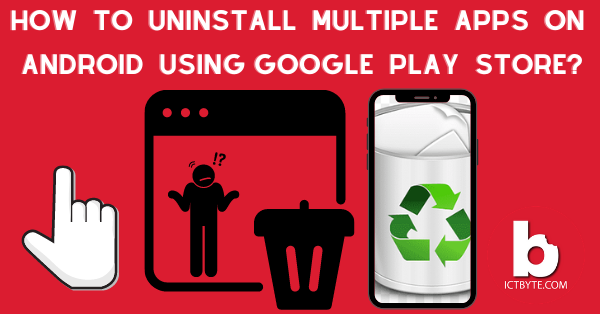 Google Play Store recently introduced and implement materialistic design and trying to adopt the Dark Mode. One of the interesting facts of google play service is that Google the search giant is taking more advantage in the survey on users experience is collecting from Play Store.

Some of the reason that Android Operating System (OS) is dealing with Google play Store because it has different features and services and facility that user wants. One of the great prove of this is recently Google play Store have implemented a new feature ability to Uninstall multiples app due to various reason.

So, TECH BYTE is going to share the best method to uninstall Multiple apps in the Google Play Store just with selective method .This feature is available on your current running play store version. You don’t need of any update to use this feature.

Here, are the steps to uninstall apps in once:

Step 1. Swipe right to open the Google Play Store menu.
Step 2. select ‘My Apps & Games’
Step 3.Now, you need to tap on the ‘Installed’ and then tap on ‘Storage’
Step 4. Then select the apps that you want to uninstall .then tap on ‘Free up’
Step 5. You will get a confirmation popup. There tap on ‘Free up..’

Now, you are all set.

We hope these guidelines help to Uninstall Multiple Apps On Android Using Google Play Store . If any queries arise regarding this topic then ICT BYTE recommend you to comment below. Here, we are always active to help you so don’t hesitate to share your doubt.