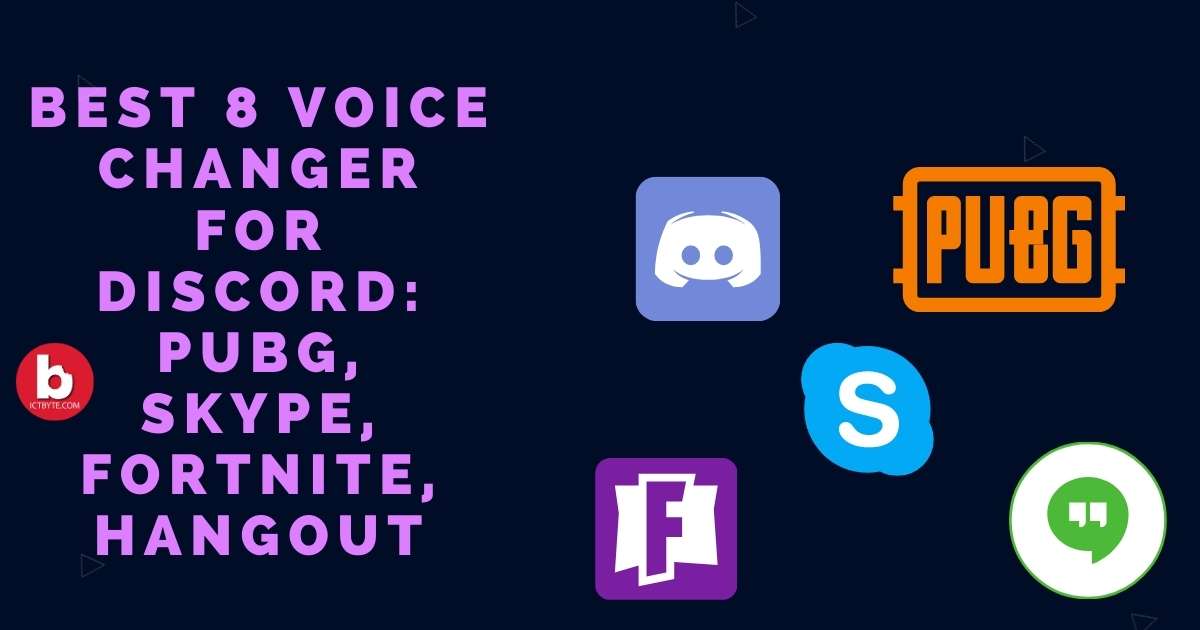 If you want to know about the best 8 voice changer for Discord: PUBG, Skype, Fortnite, Hangout then follow this amazing article about voice changer software. I think most of the people are familiar with a voice changer. Those who are unaware of voice changer, let’s begin with the definition. Voice Changer is the software that is used to change voice into robot, girl or kid.

Most of the people hange there voice for privacy reason whereas other do just for fun . However, voice changer software is considered to be good tool. So if person is intrested in changing voice in discord,pubg, skype, fornite and hangout , here are the list of 8 best voice changers that we will discuss later.

Why do we need voice changer in Discord: PUBG, Skype, Fortnite, Hangout?

Voice changer are normally used by streamers that stream games in youtube or other application. Streamers change their voice so that other person won’t identify them. It is also used for trolling and pranks.

These voice changer helps to make fun of people while playing games such as PUBG, Fortnite, etc or while talking in skype, discord, hangout.

Voicemod is one of the top popular voice changer used by gamers in a discord voice mod. It is also very easy to use and provides lots of different voices.

Not only on discord voice mod but it may also be used in other voice services such as Skype, PUBG, FORTNITE, Hangout,and many more.

If you are looking for the best voice changer with easy interface then AV Voice changer Software is the best option for you. It is used in a real-time service such as Discord and twitch. It can also be used to record voice and also can be edited to make it more natural.

This voice changer has 3 different versions. They are basics, gold and diamond. Person can choose among them depending on their budget. This software is also compatible with VoIP program, role-playing games and other applications.

The best thing about Clownfish-trasnlatoris it is completely free voice changer software and is often used in Discord. Apart fro discord it is also used in Skype,hangouts and many other applications. Some voice mod may be matched with clownfish.

This application has several effects such as Alien, Atari, Robot, Male, Female, baby and radio. It is very easy to set up .

MorphVox JR is another best voice changer software in the market. It provides free audio effect tool that changes the voice. You can use various effects such as man, woman, child,robot and many more.

This software is also widely used for PUBG, Skype, Fortnite, Hangout. But it has some drawbacks. The main drawback of this software is that it is difficult to set up.

Voxal Voice Changer is one of the best voice changer software that brings powerful voice changing features. It allows to change voice in real time as well as allows to add effects to the recorded voice.

Voice changer Software Basic allows easy access and modify characteristics of the voice. You can change your voice to deeper, higher, younger, older and many more.

It also has lots of voice effects. It can be used in many applications such as Discord, PUBG, Skype, Fortnite, Hangout

Mumble is considered as one of the best voice changers for discord. It is supported in Windows, MAC and Linux. If you want to use it in android then you can use a third-party application like plumber and for ios mumblefy.

It is basically prefered for low latency communication and is mostly used in high octane games with lots of fast action and with multiplayers like PUBG,Fortnite.

Teamspeak is one of the best voice changer for discord as well as other aplications such as skype, hangouts,pubg,forntite and also it is free to use. Operating System like Microsoft,linux,Android, ios supports this software. In design it is similar as Mumble but in functionality it offeres some unique features.

Chekout: Apps to help you work from home during covid-19