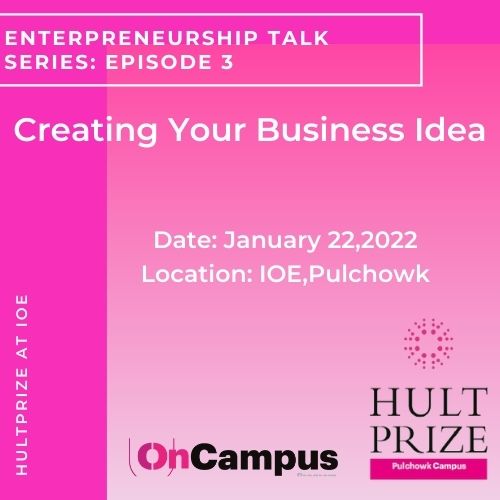 HultPrize successfully completed the third edition of the “Entrepreneurship Talk Series” titled “Creating a Business Idea” at IOE-Pulchowk Campus. The event was presented  by Bajra Technologies on January 22, 2022. Over 110 people attended the episode, which was a huge success. Despite the limitations of an online medium, the energy of the young entrepreneurs and enthusiasts could be felt throughout the engagement sessions. The event was more interactive by the talk session from four different guest speakers: Chief Startegy Officer of Bajra Technologies Mr. Shreeyan Paudel, Serial Entrepreneur Mr. Arjit Bhattacharya , Founder of Foodmandu Mr.Manohar Adhikari and Global CTO of Genese Solution and the founder of Girls in Tech Mr. Anjani Phuyal.

The event was started by greetings to audience and guest speaker with the host of session Ms. Suniti Shrestha.  Shortly after greeting the first speaker of the day Mr. Shreeyan Paudel joined the session. He is Chief Strategy officer of Bajra Technologies, an innovative tech and service firm as well as the Cofounder of two startups: “dhi solutions” for health technology and “42” for education. With his amazing presentation skills, he gave an elaborate and insightful session about business idea, product differentiation, idea validation, and marketing approaches in a business. He went into every aspect of starting and growing a great business, from the ground up. Mr. Paudel also answered questions from the audience about SWOT analysis and concluded his speech.

Mr. Arjit Bhattacharya, a serial entrepreneur, was the evening’s second guest speaker. He was engaging with the Indian participants because he is the founder and CEO of “virtualinfocom,” one of India’s first game creation and deeptech solution companies. Mr. Bhattacharya’s session added a unique synergy to the show, as he discussed reasons behind failure of startups and how to determine whether a startup can generate sustainable revenue or if it will be scalable during the ideation process. He answered various audience questions about the lean startup model and business models.

Mr.Manohar Adhikari, the founder of Nepal’s first food delivery website, Foodmandu, was the third guest speaker of the session. Mr. Adhikari talked about his experiences working with Foodmandu and how customers react to innovative company ideas. In today’s changing and competitive times, he commented about how to sustain and market a firm.

Finally, the host introduced Mr. Anjani Phuyal, the Global CTO of Genese Solution and the founder of Girls in Tech (Nepal Chapter), as the episode’s final guest speaker. He spoke into detail about how to develop a company idea, citing Amazon, Daraz, and other national and international enterprises as examples. Mr. Phuyal mingled with the crowd and started conversations, and his vibrant presence on television drew everyone’s attention. He also responded to a few queries about Cloud Computing.

At the end Mr. Bishal Bashyal, the Campus Director, concluded the show with a few words on OnCampus registrations, which are open until the 26th of January.The audience’s and guests’ enthusiastic exchanges were undoubtedly the highlight of the successful session.