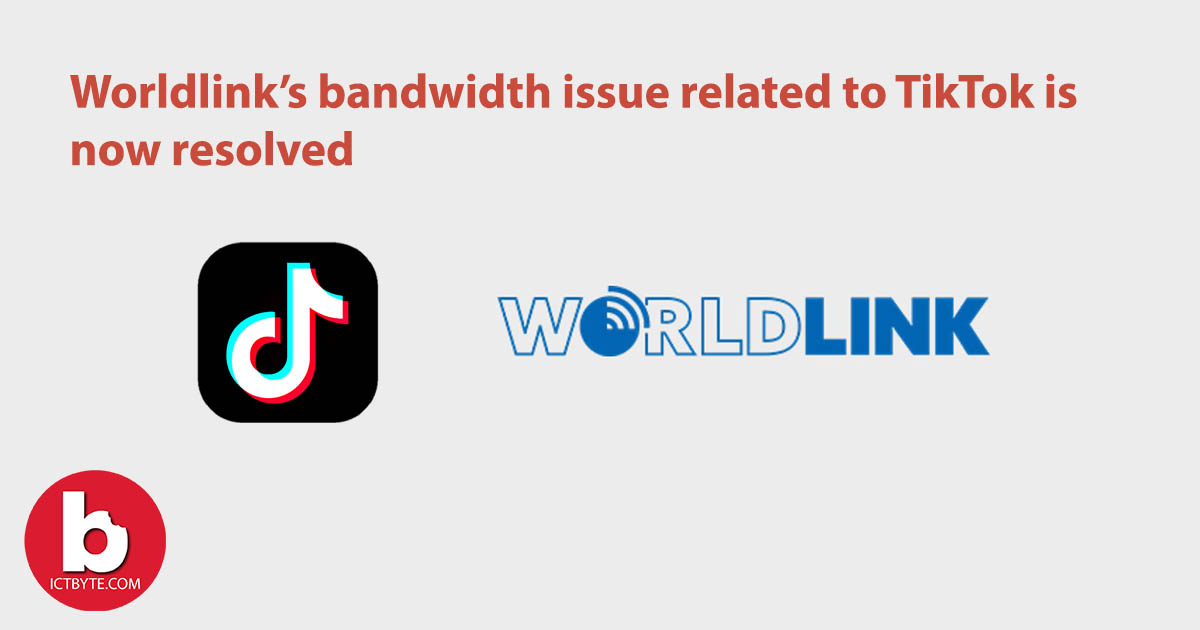 A recent statement released by Worldlink confirmed that WorldLink’s bandwidth issue related to TikTok is resolved now. Worldlink users had been facing bandwidth related issues for TikTok during the peak hour. Besides Worldlink, other ISPs too are facing this bandwidth issue due to the recent change in the security protocol of TikTok.

Worldlink is one of the biggest internet service provider in Nepal. It is trusted by many customers as their ISP. However, recently users were facing a bandwidth issue when they used TikTok. Although the internet was working fine, TikTok videos took longer to load and play during peak hours. With a high number of customers using TikTok, the Worldlink’s bandwidth issue caused a real problem to the customers and raised their concern on this issue.

The bandwidth issue with TikTok did not just occur with Worldlink, but with other ISPs as well. This is because TikTok just recently updated its security protocol and upgraded it from HTTP protocol to HTTPS protocol. The HTTPS protocol is a more secure protocol than the HTTP which provides more security.

Because of this sudden change in the security protocol of TikTok, the cache was not able to be stored in Akamai’s local server. Previously, Akamai’s local server used to store the cache so that using TikTok would be faster. But because of this change, the cache could not be stored, and TikTok started becoming slower to the users and it used more than 25% of the international bandwidth which brought trouble to the internet users.

Worldlink has now resolved the Worldlink’s bandwidth issue related to TikTok in partnership with Akamai and TikTok. They have worked to import the servers and built a local server farm of over 100+ servers. Issuing an apology for the inconvenience for the last few days, they shared the good news that he newly built cache node can serve up to 335Gbps of traffic at blazing speed to the customers. Currently, they are seeing 70Gbps of TikTok traffic served to their users which is roughly ~6% of total WorldLink’s total internal traffic.

To announce that Worldlink’s bandwidth issue related to TikTok was now solved, Worldlink released a statement as a Facebook post.

Bandwidth issue related with TikTok is resolved !! In partnership with TikTok and Akamai we have resolved the bandwidth related issue for Tiktok during peak hour. After working relentlessly day and night over the past few weeks our team has successfully imported servers and built a local server farm of over 100+ servers. The newly built cache node can now serve up to 335Gbps of traffic at blazing speed to our users. At present we are seeing 70Gbps of TikTok traffic served to our users which is roughly ~6% of total WorldLink’s total internal traffic. We once again deeply apologize for the inconvenience this particular incident may have caused.

OnePlus 8 Price in Nepal with specifications