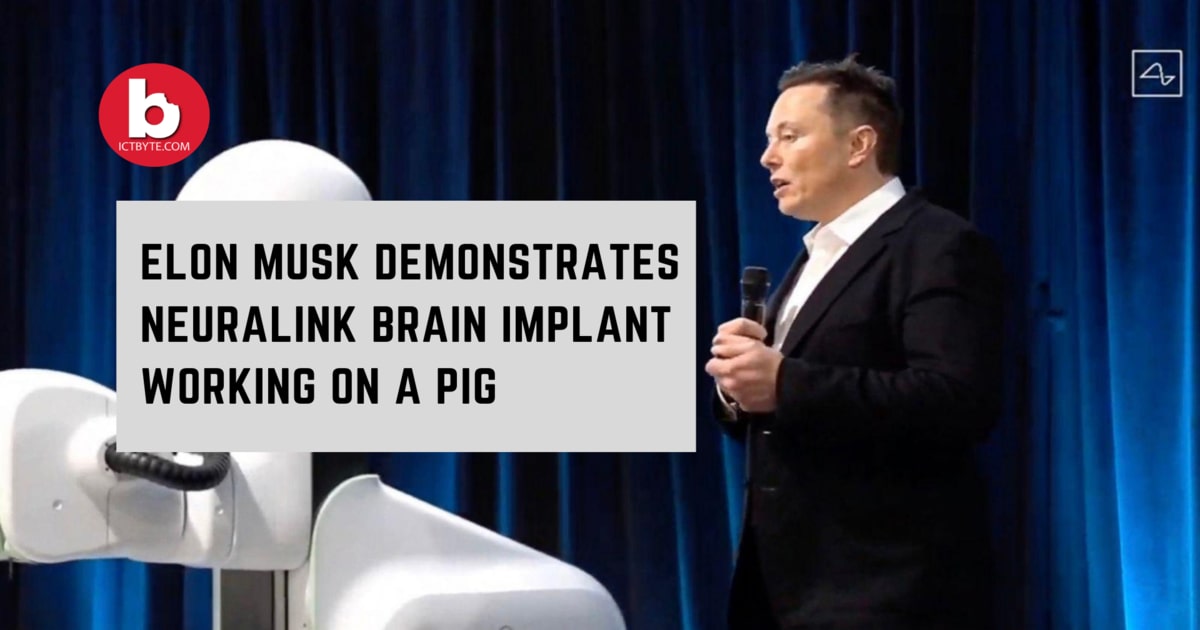 Neuralink is an American neurotechnology company, which works on creating implantable neural interfaces. It was founded by Elon Musk and others in July of 2016. Neuralink is on a mission to develop next-generation brain implants that connect machines up to the human mind, and on Friday company’s latest Neuralink brain implant was demonstrated in the brain of a pig, where it was used to broadcast the neural activity of the pig in real-time. As a means of demonstrating its current capabilities, one of the pigs, Gertrude, had a Neural link implant in her brain, while another called Dorothy, had an implant previously but since had it removed.

The main motive of bringing Dorothy to the demonstration was to show how the implant could be removed if any changes or updates should be made in the implant. The star of the demonstration Gertrude had the Neuralink brain implant inserted inside her head two months before, and it was connected to neurons in her snout. When her snout touched anything, it processed out neural spike signals that were detected by the more than 1,000 electrodes which are present in the implant.

Q: Why demonstrating on pig when product is aimed at humans?

Elon Musk: “If this testing is successful with pig then this Neuralink brain implant can be used inside the humans ”

Q: So, is this technology ready to be used in humans?

Elon Musk: Yes, if this technology is successful with the pig. Then there is a high chance it can be used inside humans.

Elon Musk: “Neuralink brain implant is especially for those who are unable to move or sense their body because of injury to the spinal cord. As it will create a neural shunt and help to restore motion of the body.”

Related: Elon Musk claims that songs can be transmitted directly to the brain from a Neuralink brain implant

The company’s early research was with the rat brain. In the October paper by Neuralink, A and B tests were done on rats. The former can insert more than 1,500 electrodes and the later test, 3,000 electrodes. The research paper describes a rat that is freely moving is attached to system B, with a USB-C slot in its head, but there’s was no clear signal of Neuralink having settled on the best place for electrodes.

Musk also showed a second-generation Neuralink brain implant which was more compact and fit into a small hole hollowed out of the skull of a human head. Tiny electrode “threads” penetrate the outer surface of the brain, finding an electrical impulse from nerve cells that shows the brain is at work. Then it communicates with 1,024 thin electrodes with brain cells that penetrate through the outer layer of the brain. Then there’s a Bluetooth link to a computing device outside. Musk said,” It’s like a Fitbit in your skull with tiny wires”.In Neuralink’s longer-term plans, the threads are designed to communicate back, with computer-generated signals of their own. He also said that he has ideas like “conceptual telepathy,” where two people communicate with each other electronically.