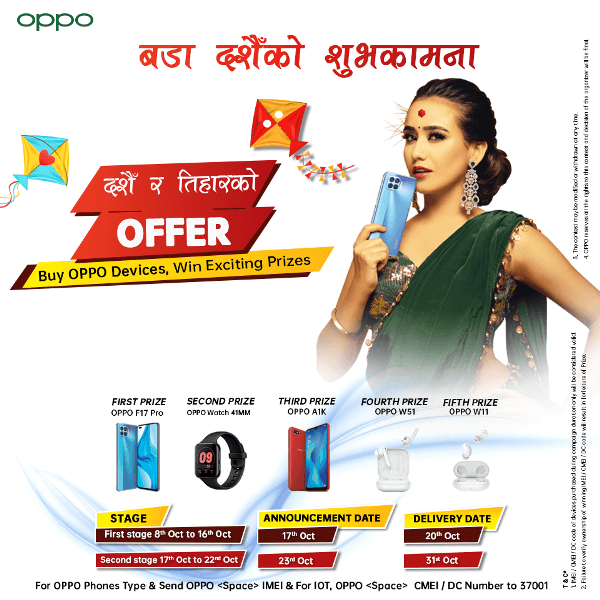 Oppo, a globally leading smartphone brand, has announced a ‘Dashain and Tihar Offer’ SMS campaign, a special gift scheme on the auspicious occasion of all the great festivals of Dashain and Tihar.

Under the gift scheme, consumers will get the opportunity to win various gifts by participating in the scheme by sending IMEI / CMEI / DC code SMS of the product during the campaign period.

‘As a global company, Oppo has always believed in localization. Nepal is a special priority market for us. The simplicity of the culture, tradition, and diversity here is truly inspiring.

Consumers can participate in the gift scheme by purchasing any Oppo product during the campaign period.

How to participate in ‘Dashain and Tihar Offer’ SMS Campaign 2020?

For participation, the consumer has to send an SMS to 37001 mentioning the Oppo Space CMEI or DC code for the phone: Oppo Space IMEI and IoT devices.

5 lucky winners will be selected in each stage through SMS received in this way.

When the winners will get announced?

The winners will be announced on October 17, 23, and November 15, respectively, through the official social media pages of OPPO Nepal.

During the campaign period, participants who are not selected as winners in the lucky draw will automatically be given the opportunity to participate in another lucky draw.

Therefore, once the participants have participated, they will have a chance to win until the last lucky draw.

Launched on October 8, the gift scheme will run until November 14, 2020, the company said.