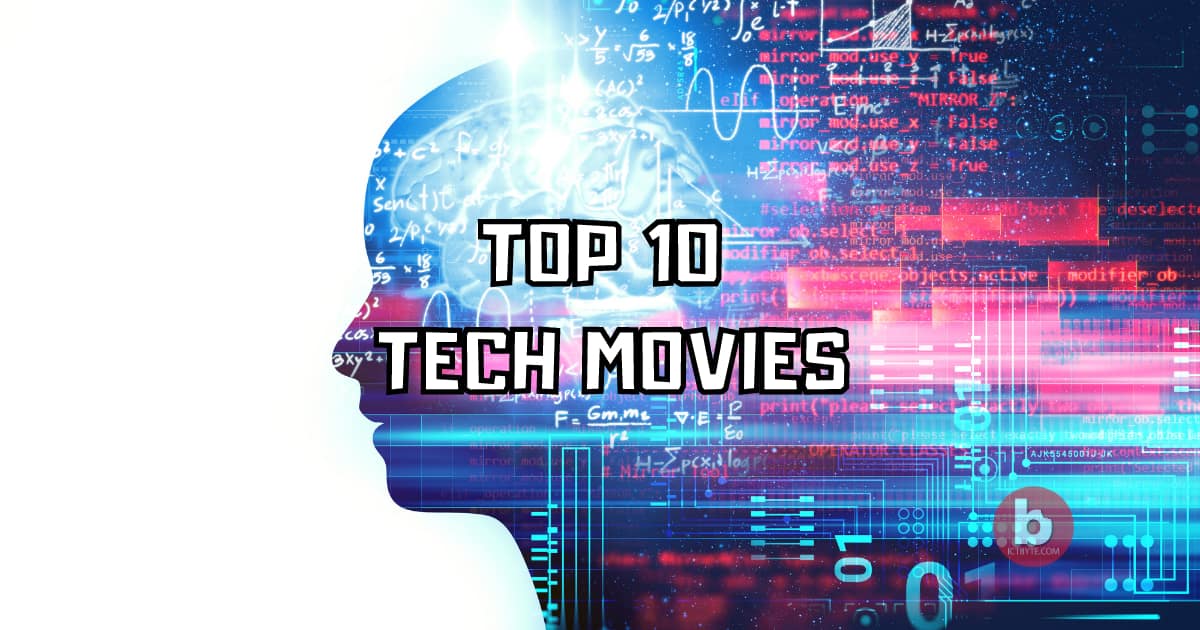 Movies are a great way to time pass. Various movies with different genres are available but the hardest part of watching the movie is choosing the movie.

As ICT byte focuses on Technology we will help you to choose tech movies. So, if you love technology and looking to find movies about technology then you are in the right place. Below we have listed the Top 10 Tech Movies which you must watch with IMDB and Rotten Tomatoes Ratings.

It is the near future, a future where murders have become so common, due to which a system had to be established called “Precrime”, where 3 psychics can predict murders before they happen. Allowing police to stop the murders which are going to be committed. Precrime is in production in Washington D.C. Where police officer (John Anderton) has solved many murders in his career. One day, he found out that he is the next one to commit a murder. After that the journey is about, he running away from a system he helped become successful, and trying to find out the reasons why he was set up to commit murder.

Based on the real-life story of legendary English mathematician and cryptanalyst Alan Turing, the film is based on the biography ‘Alan Turing: The Enigma’ by Andrew Hodges. The movie portrays the nail-biting race against time by Alan Turing and his team of code-breakers during the Panic days of World War II.

Theodore is in the final days of his divorce from his wife. One day He decides to purchase the new OS1, which is advertised as the world’s first Artificially Intelligent operating system. Then movie revolves around Theodore as he develops an unlikely relationship with an operating system.

The movie is about the Biographical visualization of the men who founded Microsoft and Apple and a look at the early days of the companies. The film attempts to compare the two company’s operations and differences in the founder’s vision and operations.

Tony Stark is the son of legendary weapons contractor and inventor Howard Stark. When Tony Stark is assigned to give a presentation on weapons , he’s given a tour-ride on enemy lines. That ride turns out to be a bad idea when Stark’s Humvee that he’s riding in is attacked by enemy combatants. He barely survives with a chest full of shrapnel and his heart attached to a battery. In order to survive, he comes up with a way to miniaturize the battery and figures out that the battery can also power other elements as well. Thus Iron Man is born as he creates a unique weaponized suit of armor to fight evil.

WALL-E which stands for Waste Allocation Load Lifter Earth-class is the last robot left on Earth. He spends days cleaning up the planet. During 700 years, he spots a sleek and shapely prob, EVE sent back to Earth on a scanning mission. WALL-E starts on his greatest adventure when he follows EVE across the galaxy.

Avatar is one of the few modern time tech movies that fully justifies 3D technology. It revolves around a Marine who is paralyzed on limbs and is dispatched to Pandora on a unique mission becomes torn between protecting the world he feels is his home and following his orders.

In a cyberpunk vision of the future, man has developed the technology to create humanoid replicants androids that are illegal on Earth. In Los Angeles, California, 2019, Deckard is a “blade runner”, a cop who specializes in eradicating humanoid replicants. When four replicants escape from an off-world colony and come to Earth, He is forced to come out of retirement.

A junior programmer wins a company lottery, who is working at the company that runs the world’s most popular search engine. The prize of the lottery is a week at the CEO’s research facility. When he gets there he discovers that the boss has been working on androids with superior Artificial Intelligence (AI). The programmer’s job is to test how “human” the AI-based android is. What develops is a manipulative game between the programmer and the android.

The final name on the Tech Movies list is ‘The Social Network’. This movie is the story of ‘FACEBOOK. ‘Mark Zuckerberg, a Harvard student creates the social networking site that would become known as Facebook, he issued by the twins who claimed he stole their idea and by the co-founder of the company who was later squeezed out of the business.

Also tell us which one is your Favorite among all the tech movies?