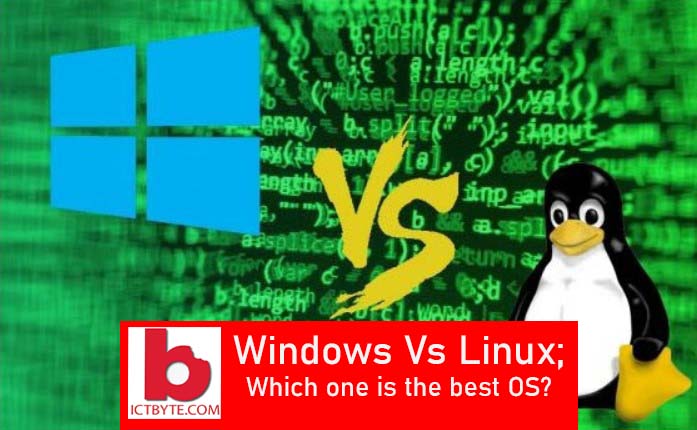 Both Linux and Windows Operating System are the well known operating system. They had their own pros and cons in terms of security, architecture, and performance level. Both are best according to the user’s purpose and the work needed to be done in this both OS.
First of all, I want to give you a quick overview of OS before making a difference between the Linux and Windows OS.

The operating system is a low-level system software that handles hardware and software resources. It handles all the basics functions of computers like task scheduling, resource management, memory management, controlling peripherals, networking, etc.

The main thing you should understand is its crucial part of a computer system which acts as an interface between computer hardware and software.

Linux is a free and open-source OS which is based on Unix standards. It provides user interface compatible with Unix based systems as well as programming interfaces through the command line. Linux also provides various applications and separately developed elements that are fully compatible and free.

An abstract layer is used in Linux to look after the different file systems, but it looks like a hierarchical directory tree for the users. Linux also supports networked, virtual file systems, and device-oriented systems.

Ubuntu 18.01 LTS is the latest release of Linux family OS.

Windows is a licensed operating system in which source code is inaccessible, so it is not free but licensed. It has a great user interface, which makes the Os compatible for every individual without having the knowledge of programming languages.

Windows 10 (1709) is the latest release of Microsoft Windows OS. Its default user interface is Graphical(Windows shell).

Conclusion: Which Operating System is right for you?

In many ways, Linux beats Microsoft. The open-source solution is best known for its stability, security, and speed. But with this reliability security comes a little difficult setup. You must have a bit of knowledge to set up the system perfectly.
In contrast, windows are designed for everyone without any prior knowledge of programming knowledge. Users looking for a functional system that doesnt require difficult setup or prior setup knowledge mainly use Windows OS. Its ease of use so its popular and many users make a choice for Windows.

Even now most of the users are using Windows. They hadn’t even thought of trying Linux. To get a better idea which is best or which to use you first should try it on your own and experience the difference between them.

Let me list out some advantages of Linux for you;

Advantages of Linux over Windows

Share your thoughts on the comment section below about which OS user are you and what are the reasons behind this.

Top 7 things to consider when buying a new laptop

How does YouTube recommend Video? A Guide to Getting More Views