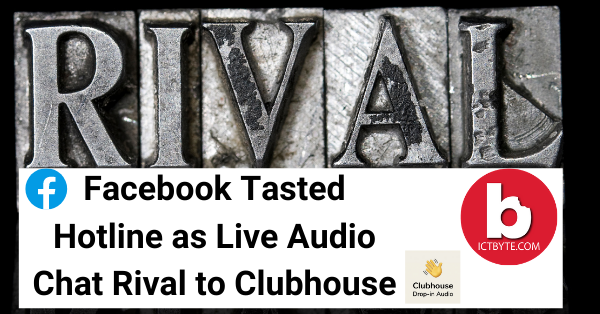 Facebook on Wednesday has launched survey and experimental online package called Hotline which is an attempt to boost up the new live audio trend by the social media giant to get popularity like Clubhouse. Users are being attracted away from social media heavyweights by audio-only online rivals.Application of Facebook is an essential spin on Reddit’s Ask me anything and the Clubhouse, drop-in-audio social media launched on April 2020 and got boomed during the period of pandemic and also at this moment.

Hotline is the service where user get a blend of voice, text and video options from Hotline in order to participate in the online discussion with the hosts.
Users are allowed to raise any type of queries and questions in written format which is almost impossible on clubhouse at this current time. The extra feature of the hotline service is that it will be extreme loyal at their users because Speaker/user can choose who to invite “on stage” to speak.

The main benefits of Hotline service is that it will help the Speaker about how to interactive live multimedia Q&A’s with the expert and it helps to learn many thing from expert i.e professional skill, helps to get idea to build own business, upcoming strategy and many more. The speaker will have the option to open the camera to be seen and can also have the authority to remove the abusive comments from the texts. For the effective running mechanism of Hotline Facebook has set some statements for the acceptable stuffs over the service.According to Facebook they are also trying to test other platforms also.

Facebook has increased the Live video and Audio abilities on it’s official site and secondary site (Instagram). Facebook team is now working on the new strategy which includes to attract people from videoconferencing service and audio abilities. They are now following the success of Zoom and Clubhouse.

What is Clubhouse? Things you need to know about clubhouse
How to create room on clubhouse?